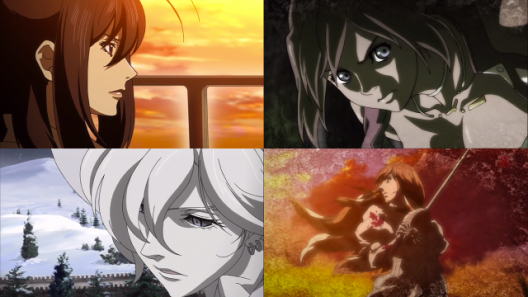 This review took me an awful long time to write considering I’ve been planning on writing it since… well, since the first review I wrote for this blag. I’m pretty sure that was a few years back. Instead I wasted time making fun of the QUALITY and some parts of the fanbase and some other stuff and that’s… that’s just not a review. So here is the review, which I present as an apology for all those silly posts tagged with “tatakau shisho.” … even if I do have zero regrets about making those posts.

Alright, let’s start this off with something short. I sure do like the music in this (composed by Yoshihisa Hirano, who I’ve never heard of otherwise)… but I guess it’s not a style of music that your everyday anime watching person would enjoy. I feel so alone. I guess part of the problem here though, beyond the style itself, is the fact that only about 15 of the songs have any implication of happiness in their sound. Everything else is OH JEEZ EVERYONE’S DYING or sob sob everyone i knew is either a bitch or a ghost — maybe both. Oh, and there’s also a handful of super ominous mysterious ones too. But like, 15 happy songs? Out of 40-something? Crazy! But I mean, they composed what was needed for the story… In fact they composed more than what was needed, which is why I get to express slight displeasure at the fact that “The Town of Miners” was played only once or twice. I like that song!

And then there’s the visuals, which are a very mixed bag. The art style itself is pretty cool. I like it anyway and I don’t care about anyone who disagrees. Except… there’s that dastardly QUALITY issue! The art and animation are very inconsistent, and I’m sure it’s because they didn’t have enough time/money. One moment you’ll just have this beautiful shot of someone’s face and the next moment you’ll have something that looks like a five year old drew it. Or worse yet, something that looks like I drew it. Do you have any idea how bad I am at keeping my lines straight and my proportions anywhere near accurate? It’s near impossible. Although it could be argued that I actually am a five year old seeing as how I love cartoons and books for children, coloring books, and The Very Hungry Caterpillar. Yes, that kitten in that picture is a real kitten. I don’t know why he’s there.

Anyway. So, the story! Sure is depressing a lot of the time. Story and Characters are really where Tatakau Shisho shines, though. I mean, the chracters are SUPER F YEAH. And I’m not the type to just spit out internetisms like that for nothing. There are one or two characters that I personally find rather boring but as I whined about in one of my earliest posts, apparently those two were very, very popular among people who watched this. So maybe I’m just tasteless. But you have characters like Noloty who is just impossibly likeable. She is a stereotypical happy excited won’t ever kill type of character… but Tatakau Shisho makes it work. How? Because as I said, the characters are super f yeah. That’s how. Hamyuts is another cool character. Not because I think she’s particularly likeable (although I sure do like her) but because she gives the story such a huge level of ambiguity for the longest time. You just aren’t ever sure if she’s really a villain or one of the good guys.

That brings me to my next point. With a character like her you’re going to have all sorts of tension, all the time, right? One thing this story is great at is raising the tension. Raising the stakes. It’s great at making you think that really huge stuff is going down and that what’s happening is really important and urgent (well, not so much in the first two arcs but you can still tell even from those). An unfortunate result of this, however, is that Tatakau Shisho is prone to anticlimaxes. After all that buildup, you’ve readied your ears for an explosion. But instead, at the end of each arc, you’re offered the sound a of a pin drop in comparison to your expectations. Just a little disappointing, but as always it’s about the journey, not the destination.

Now let’s talk about the best part of the story. The fact that it’s able to weave everything together in a rather coherent way. By “weave everything together” I don’t mean anything like not leaving plot holes or whatever. I mean everything is connected to everything. The past that people view through the books of the deceased; flashbacks, thoughts, and initially-confusing comments from those still living; and even just things from earlier episodes that you didn’t bother committing to memory because it didn’t seem like a big deal. It all comes back again, and it all ties together so cleanly. It is just really cool to watch this show for a second time, because then you’ll start noticing all of these little hints and clues you never picked up on before or just totally forgot. Too bad on a second watch you don’t have that awesome feeling of not knowing what’s going to happen next. Those twists sure were great the first time.

tl;dr Lots of flaws but most of them are in that category of “other stuff” that most people place as secondary to the main dish: characters and story. And uh… please, if you try to watch it, don’t give up after the first episode. I hate it when people say this (so of course I hate myself now as well), but wait until the first arc is over, or maybe even until the second arc begins, before deciding it’s not for you. I don’t like the first arc very much.

3 thoughts on “Tatakau Shisho: The Book of Bantorra”