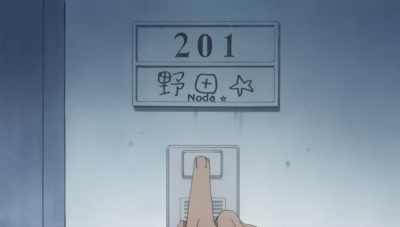 That’s right. Megumi Noda (AKA Nodame) of Nodame Cantabile fame is one of many false identities of the contractor assigned the Messier code BK201. Many individuals foolishly believed that Darker Than Black’s story was contained only within anime series sharing that title, but I have found overwhelming evidence that this is not the case. Extremely overwhelming. Spoilers for Darker Than Black abound, so don’t read this or anything if you haven’t finished it yet.

When I lived in St. Cloud, I was trying to get a nice studio apartment at a nice small apartment complex a mere ten feet away from two sets of train tracks. I was shown multiple apartments, including 201, and I decided I wanted that one. Not because of the number, but because it was one of two that had hardwood floor instead of carpet and it was on the dark side of the building (the other uncarpeted apartment was on the opposite side where the sun was ridiculous). Long story short, I ended up getting the one on the sunny side instead of 201. Because some other guy supposedly wanted 201 before I did but didn’t call back for ages.

How can you even do that? 201 was going to be my apartment. But then some mystery guy snatches it away from me at the last minute? I bet that isn’t even legal. I seriously only found out about this when I went to pick up the keys to move in. Only BK201 himself could get away with that. And to make matters worse, he tried to lower suspicion on himself by introducing himself to me and acting all neighbourly after I walked out to do my laundry once and almost ran into him on his way to his apartment. He was also Asian. I was sure not to lapse into a false sense of security.

And I mean, go figure a guy codenamed Hei who stars in a series called Darker than Black would wish for the dark side of the apartment. Which coincidentally meant he got apartment number 201. Bet he had a better view of the stars from 201, too, since that side was all houses. My side had all the bars and theatres and a gas station. But anyway screw that guy I might have had to deal with ridiculous sunlight but I also got a view that would make train enthusiasts piss their pants with jealousy.

That was a true story, by the way. You may doubt the conclusion but you cannot doubt the facts. Because of this experience and the fact that Hei getting an apartment to match his Messier code would be too big of a coincidence, I have every reason to believe Hei just has the Syndicate get him into #201 of whatever apartment they choose. Even if someone else is already set up to be moving in there. It wouldn’t be difficult for them to bribe the rental companies, after all.

There are many hints that pile up to form real evidence alongside the actual real evidence I have, too. For example, Nodame is all over Chiaki until he deprives her of his lunch. Then she sets out to vaporise him. Hei also likes food. Nodame also sometimes gets super serious and makes demands of people in the most monotone voice with the most threatening facial expressions. Those are the times when she drops the act because it’s time to get down to business. 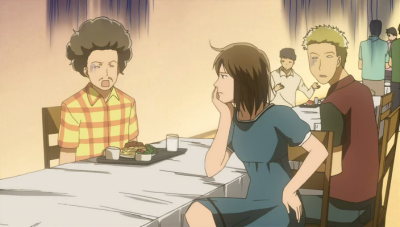 Nodame also spends a notable amount of time out in the middle of the night under the stars, like in episode 9. If it wasn’t obvious that she was doing overnight sheet music memorization (necessary for Hei, who unfortunately due to bad situation growing up never learned to play piano as a kid and now has to pass as extremely gifted for the sake of whatever his mission is in Nodame Cantabile) I’d suggest that she’s stargazing (a thing Hei likes to do). That’s probably why she did it outside. Then she gets stars AND practice.

Nodame is also extremely clumsy. We all know how great Hei is at pretending to be clumsy. But I mean, the way she shredded that umbrella at the beginning of episode 8? That just doesn’t happen by accident. It happened by accident ON PURPOSE, either with the help of her neat gadgets from the Syndicate or her powers as a Contractor. Maybe you will try to tell me that electricity is not capable of doing to an umbrella what Nodame did. But the end of the first season of Darker Than Black showed us that his power should be able to do more than just zap things. Like shredding an umbrella.

Nodame also frequently gets acquainted with lonely strangers (like creepy famous guys called “Milch”) and sometimes gets her friends to help her help said strangers out, much to their discontent. And why does she do this? First, because she is a nice person, just like Hei is actually a nice person when he’s not breaking fingers. I mean, Hei does that stuff all the time in the first season.

Nodame also considered kissing this Milch guy, despite the whole creepy dangerous perverted stranger thing, to get something from him. Actually, to get him to do something for the benefit of a Chiaki, which would somehow benefit her mission. Gee, I sure do remember a kiss in episode one of Darker Than Black which was not a kiss for the sake of it being a kiss but so Hei could get something (e.g. closer to a Chiaki AND NO I BET IT IS NOT A COINCIDENCE THAT CHIAKI IS ALSO THE NAME OF THE GUY NODAME STALKS IN NODAME CANTABILE).

Nodame has also been shown two or three times to be creating some bizarre spheres of light. Possibly creating new stars, or even new planets. I would be willing to bet my lunch money that Hei could find a way to do that with the way his powers work.

In Paris Chapter, we see Frank ask Nodame if she is Chinese. Now why would he ask such a specific question? Wouldn’t you ask “What country are you from?” or “What’s your nationality?” Why ask “Are you Chinese?” It’s possible he is doing the silly westerner thing and assuming you are from a specific country. Or… perhaps Frank has an idea of who Nodame really is. Frank knows. Nodame is Hei. She was even wearing black at the time.

There is one last piece of evidence I wish to present. It was said that BK201 was originally assigned to a female Contractor. Darker Than Black makes up some nonsense explanation about it actually having been Hei’s sister, Bai, but we all know that’s just crazy talk.

If she could actually give her abilities to other people, then why would she give them to Hei when she was apparently so sad that he fought even though he hated fighting and all that? Why not, I don’t know, give them to Amber? Think of how much easier their goals would have been achieved had she done that. See, there’s no way that’s what happened because it’s completely illogical.

It’s easier to realize the obvious. BK201 was and still is a female Contractor. We can probably safely say that Nodame is female. But we can’t necessarily confirm that Hei is male, can we? We also don’t know his real name, which is no doubt a female name, because Li is made up and we know Hei is just a codename, if nothing else than by the fact that we know Bai’s real name isn’t Bai.

As you can see, the evidence is overwhelming and near-irrefutable. Megumi Noda is BK201. But there may possibly be more unexpected secret identities we have yet to uncover involving the characters from Darker Than Black. For example, I have a screenshot of Misaki Kirihara showing how freakishly long her legs are. Aside from characters in series where everyone is noodles, I know of only one anime character with legs comparable to Misaki’s. Further investigation is required before I can make an official statement on this matter.