Here’s where I insert that one screenshot you’ve seen everywhere from the first episode of Fujiko pointing a gun to the camera, still garbed in that ridiculous veil. Oh, wait.

I thought the ending of this series was pretty much the only appropriate way to go. I’ve seen enough people expressing an opinion that opposes mine that I felt compelled to write this post, so here we are. Defending the backstory of Fujiko presented by this new series.

There might be other, more timely posts on this subject. Lupin III: The Woman Called Fujiko Mine did finish airing almost a year ago, after all. But were those other posts written by Sandra? I don’t think so! Spoilers abound, so don’t read further if you don’t want to see them.

If what you expected from this post was something about how Fujiko supposedly did very little by herself to solve her problems in the ending (which seems a rather silly criticism in a world where Sailor Moon is praised for how Tuxedo Mask merely supports Sailor Moon rather than saving her; from the eight episodes I watched of that it didn’t seem very different from Lupin’s involvement in helping Fujiko get through the last episode of this series) then this is not for you. This is specifically about the nature of Fujiko’s “backstory.”

For most of the series, we were lead to believe that Fujiko’s backstory involved something sexual in nature. I mean, the ending presents images of a very young, sexualized Fujiko. It’s hard not to assume this. Early in its airing, I was curious about where it would go with this and if it would even handle such material properly. But I remember watching episode 9 and thinking the whole time, more and more, “Don’t go in this direction. I don’t actually want this and it won’t be good anymore if you do it.”

I’m not even sure why anyone (myself included) ever wanted such a backstory for Fujiko. It’s one thing to want to learn more about a character, but I thought we were tired of cheap backstory material like this. I thought we all agreed that a single event in an individual’s past does not define them. With a character like Fujiko I’m also reminded of something I’ve heard regarding Cowboy Bebop’s Faye Valentine: that some people out there disliked how her backstory demystified her character. I hope those people had no problems with the ultimate lack of demystification of Fujiko in this series. 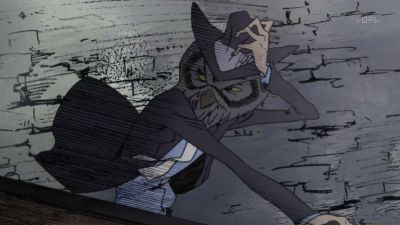 There’s another thing going on that I thought was rather clever, though. Fujiko is brainwashed into thinking she had this horrible past, and similarly the viewers were tricked into thinking she had it. This isn’t always good for enjoyment (this sort of meta cleverness also made me stop caring about reading Umineko), but I do appreciate it on an intellectual level and obviously I wouldn’t be able to if they had played her backstory straight.

And now for the most important point. The last few episodes, while sometimes incredibly stylish, were definitely my least favourite and the least memorable… They actually tried to be serious, and it didn’t work for me. These characters and these situations just do not mesh with something that serious. It doesn’t fit at all with the goofy shenanigans that permeated all episodes before 10. Even episode 9, despite being the turning point of the series, was filled to the brim with comedic moments.

It was usually serious only in passing. To change that would be to change the entire feel of the series up until then. And that’s really amusing to me because most of the people complaining about the revelation of Fujiko’s backstory said something to the effect of “stick to what you started with, don’t totally change everything.” Yet if they delved into a history of some kind of experimentation or sexual abuse, that would totally change everything. At least if they say “by the way, we were just kidding about that dark backstory” like they did it’s staying true to the lightheartedness the series established early on and never really let go of.