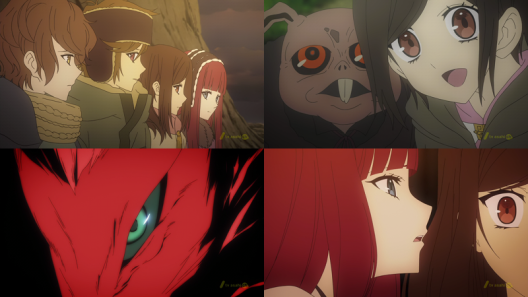 Shin Sekai Yori (adapted from the novel of the same name by Yusuke Kishi) is an anime that aired late 2012 that I actually intended to review late 2013 but I never got around to it. So here’s your late review, in late 2014.

The music of Shin Sekai Yori is wonderful. While a lot of it is pieces I would have no interest in listening to outside of the series, those very same songs are absolutely perfect for the tone and setting. Much of this is accomplished by the choices in instrumentation evoking images similar to the technologically-lacking Japanese setting of the series. There are a fair number of songs that are appealing to listen to outside of the series too, and they get away with that by just being that awesome. Examples of this are the vocal pieces used for the intro of most episodes, or the songs used in the more emotional scenes.

The music is wonderful overall, fitting absolutely perfectly when it’s not being straight-up great. I distinctly remember at least one song that sounded like it was straight out of a VN, however, and I mean that in every bad way. Thankfully the story didn’t offer many opportunities to reasonably use that song, and the creatorive team actually knew what they were doing so songs were never used where they were out of place.

The visuals are interesting. Or rather, they’re used interestingly. The designs and colouring of the characters are very simplistic, and sometimes a bit crude. This bothered me at first. This wasn’t because I was against simple things, but because I was having difficulties telling characters apart. This probably won’t be a problem if you don’t have terrible memory, though, I guess. If you don’t like simple, though, this will certainly bug you.

The simplistic style was a great benefit to certain scenes involving the more fantastic elements of the story. Some of the crazy new animals in the world of this series are really creepy in this style and being given a very brief view of them works to great effect for the scenes that are supposed to, well, be creepy. The only problem is that these things are not always glossed over briefly, and when they’re not a lot of them look ridiculous and stupid because of the style. I don’t believe this ever happened in a scene that was meant to be scary, but if you remember what they looked like in the few scenes that showed them clear as day, it might spoil the effect the next time you see that particular critter in a horror sequence.

Some scenes in this get a less flat style of colouring, and it looks pretty cool. Those scenes are also almost exclusively either scenes from the episodes that were directed by Shigeyasu Yamauchi or scenes that involved a certain character. For “scenes that involved a certain character” this change is actually really awesome, because later in the series those are the only scenes that will be this way, and because of the storyistical circumstances of that character, having everything suddenly look different is just a really great idea. 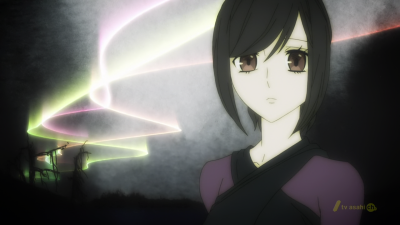 The characters in this are generally not very interesting. Unfortunately. They’re not exactly bad or anything, but few of them get to have more than a small handful of characteristics and personal problems to deal with. This story is one that’s more about what happens and why, rather than the people involved in the things that are happening. I will note, though, that Squealer is a pretty awesome character.

Now, the story. Here’s the most important part. No matter what you may think from watching the first few episodes, this story is great. It certainly has some problems with pacing, seeing as how it dedicates an entire ten minutes in episode 2 to a stupid ball game that will never be interesting or relevant enough to justify the fact that ten minutes were spent on it. But Shin Sekai Yori is not set up like a standard anime would be, with something big happening every episode to hold your hand and your attention.

You need to go into Shin Sekai Yori believing that it is a book (which it is). Interesting things do not happen immediately. Things need to be put in place and built up first. Most of the events that take place in the series become direct catalysts for later events. Things don’t happen for no reason in this. They happen because they’re the logical result of what has already happened.

There’s also boatloads of talking throughout the entire series. In fact, most episodes are mostly people talking about what’s happening, what happened, and a bit of theorizing on what will happen. That’s going to bother some people, but I am going to say that I almost always found the talking well worth my time. A lot of it either contributes to world-building (and goodness is there a lot of wonderful world-building in this series) or helps drive the story forward.

But before I go away from the topic of pacing, Shin Sekai Yori also has multiple time skips. I’m not against time skips if there’s a reason for them, and there is in Shin Sekai Yori, too, so that’s not why I brought them up here. The way the timeskips were handled was very poor. As in, they had no money so they couldn’t buy enough oxygen to keep their brains functioning well enough to realize that dropping us in a time skip and suddenly having characters feeling each other up as if they were in some sort of relationship felt really jarring. Oh, they were in relationships? Well, gosh. This show dropped me right in the middle of them without warning, then. Never saw them coming.

Off topic, but here’s an out of context picture to let you know that despite all the talking in this anime, there’s also a lot of things exploding into flames.

It gets worse in a different timeskip. If I remember correctly, the very first scene after this time skip was the main character thinking to herself about how she’d had a falling out with one of her friends about “something trivial.” … So we missed the context for the falling out, and thus missed out on things we probably would have felt had we gotten to see that before they started talking to each other again. It probably wasn’t a bit deal, but it’s jarring and made me roll my eyes 180 degrees. Maybe. I don’t actually remember if I did that.

Previously, I said that the characters were pretty bad. Well, I don’t know, so, just reiterating here… you’re not gonna be able to care about these characters as actual people. But this is only true for the human characters. The queerrat characters that get any bit of development are actually pretty great. Squealer and Kiroumaru were pretty great, I thought.

Stick a bunch of ratlike creatures who are enslaved by humans with a bunch of tired kids under extremely strict rules (of the “if you do something bad you’ll be fed to the lions” variety) and you get some interesting tension between the two groups. The queerrats have every reason to want to bow down to every whim of the humans, and they also have every reason to want to kill them. So you end up with more than a few scenes where the human characters are relying on the queerrat characters to do their part and not suddenly betray them, lest the human characters lose their lives. The tension in these scenes is perfect.

I did mention this sort of counts as horror and mystery, right? There’s gonna be a lot of that.

I wrote everything except for this sentence half a year ago so I don’t remember if I had anything else to say, but this seems like a pretty cool place to stop talking about Shin Sekai Yori. A few months ago I went to a museum in Seattle and they had naked molerats and I took this very seriously, while everyone else was laughing at them and saying they were stupid because they were sticking together instead of trying to explore the series of tubes they were held in. Those guys were jerks.