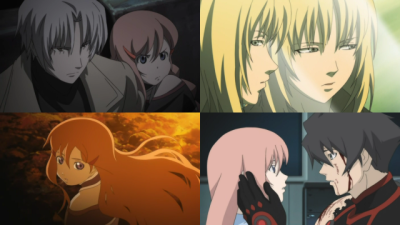 Innocent Venus is a show I watched for the first time a few years back. I’m not sure what the exact reason I chose to watch it was, seeing as how I had never heard of it before (and I still never hear anyone talk about it). I’ll just assume this was way back when I was checking out random anime like Speed Grapher and Noein and I chose this one in particular because the opening was by Yousei Teikoku, a band I’m pretty sure I was first discovering around that time.

My first impressions of the show after my first watch of it… Well, basically, I had loved the first half aside from the horrible mech fights, but once a certain plot twist happens I felt like too much went out of control. I didn’t understand what was going on in the plot anymore; the hand to hand fight scenes stopped existing, being completely replaced by the extremely inferior mech fights; the animation let itself go in the bad way, giving such results as my previous entry; and overall it just seemed like a massive trainwreck. The only thing I remembered still liking after that point was the relationship between Joe and Sana, which is actually the reason I ended up rewatching it.

END_OF_DOCUMENT_TOKEN_TO_BE_REPLACED 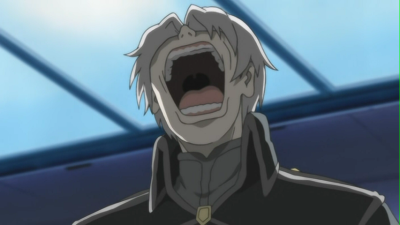 This is why I feel bad for liking Innocent Venus. True story. Do you seriously think a plot twist makes it okay to animate faces this way?! Wow. That episode is so unbearable but I’m happy I rewatched the series since it reminded me that the face thing is only this stupid in this single episode.

Expect further whining about this later.